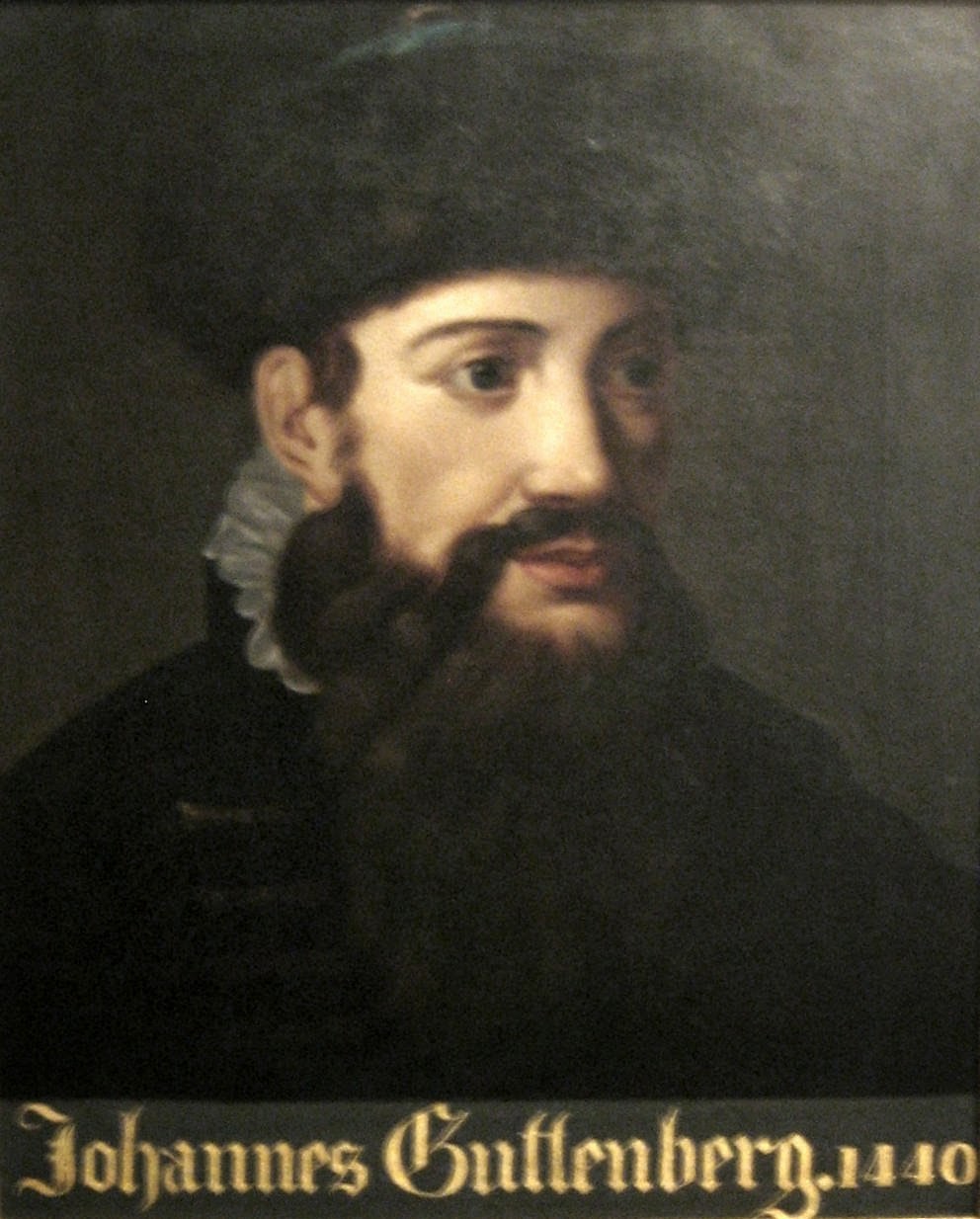 Commonly considered the inventor Johann Gutenberg printing press. What he actually did was to develop the first method use a moving block letters and printing machines in the form such that various kinds of written material can be printed quickly and accurately.

There is no discovery that jumped out of a person's thinking, nor the printing press. Seals and seal spheres adhere to the principle that the process is similar to block printing has been known in China for centuries before Gutenberg was born and the evidence shows that in the year 868 AD a printed book already found people in China. A similar process has been known in Europe before Gutenberg. Block printing allows printing many copies of a particular book. This process has one disadvantage: because a new and complete set of woodcuts or metal must be made to a book, by itself it is not practical to print a wide variety of books.

Often called the most important contribution was his discoveries in the field Gutenberg printed letters that can move. In this case also a similar case has been found in China around the middle of the 11th century AD by a man named Pi Sheng. Original print letters made ​​of a kind of soil that can not be durable. Meanwhile, some Chinese and Korean have done a series of improvements and work well before Gutenberg. The Koreans use metal block letters, and the Korean government helped a smelter to produce printed letters at the beginning of the 15th century AD Apart from all this, is also wrong to assume that Pi Sheng had a special influence. At the first level, Europe has not learned movable letters from China, but for their own creations. Second, printing with movable letters way has never been used in general in China's own until just recently when modern printing procedures they learned from the West.

There are four essential components of a modern way of printing. First, print letters that move, following some adjustment procedures and laying the letters are well established. Secondly, the printing press itself. Thirdly, a matching ink to produce prints. Fourth, materials such as paper to print it. Paper has been discovered in China many before the printing press by Ts'ai Lun and its use has been widespread in Europe before the time of Gutenberg. That is the only element of the Gutenberg printing process that is ready to be. Although other people have done all sorts of work on each component, but Gutenberg had managed to do all kinds of improvements. For example, he developed a metal alloy for printed letters; pouring liquid metal to block print letters appropriately and accurately; oil presses and printing ink needed to print.

However, the overall contribution of the mind Gutenberg bigger than anyone else in terms of improvement of the printing press. Its importance lies in its success mainly combines all the elements of the printing press into a system that is effective and productive. Because of the printing press, in contrast with other previous findings, a large-scale production process are key. Sepucuk rifle itself is much more effective than a bow and arrow. A printed book is not much different from a handwriting book. Excess printing machines thus lies in terms of its massive production. What has been developed by Gutenberg was not for a discovery tool or reason, and not just a series of improvements, but a complete production process.

Treasury biographical rare Gutenberg us about yourself once, we only know he was born in Germany around 1400 AD in the city of Mainz. Contributions to the art-prints prints occur in mid-century and the work of the so-called Gospel-What terbagusnya Gutenberg-- printed in Mainz around 1454 AD Curiously, the Gutenberg name was never mentioned in any book, nor in the Gospel Gutenberg, although clearly he himself is printed by means of discovery.

Gutenberg was never seen as a businessman; he really had no desire to make money from his invention. He is often involved with the court charges that resulted in the necessity for him to pay ransom in the form of equipment tools to his friend named Johann Fust. Gutenberg died in 1468 in the city of Mainz.

One of the Gutenberg influence in world history can be profitable if we associate with the developments in China and Europe in times of the next. At the time of Gutenberg was born, the two regions were almost as advanced. But after Gutenberg invented the printing press Europe took off at full speed, while the Chinese, who are still using print blok-- progress is rather slow. Perhaps an exaggeration if we say development of printing the only factors that cause differences in the level of progress, but the findings clearly have important meaning that can not be removed.

Also important to note if only three people in this book list lives at the five centuries before Gutenberg, while sixty-seven lives in the past five centuries after Gutenberg's death. It shows how very meaningful, lays Gutenberg's invention could be called a discovery penting-- withdrawal trigger a revolution in terms of the progress of the modern era.

Alexander Graham Bell may even not born into the world, but the phone remains found at the same time in history. So also can take a sample of other inventions, without Gutenberg, invention of modern printing will be delayed a few generations, and measured its effects great, no one else can honor Gutenberg listed in this list.