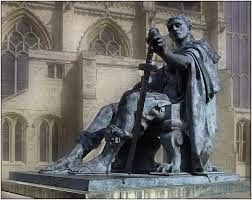 This figure first Roman Emperor who converted to Christianity. Through convert it and the various ways by which this development, he holds a prominent role in the change of religion of Christianity which are pursued and threatened punishment became the dominant religion in Europe.
Constantine was born about AD 280 in the city of Naissus (now called Nis) in the country which is now Yugoslavia. His father was a high-ranking officer, and Constantine spent his youth in Nicomedia, where the court of Emperor Diocletian was.

Diocletian ascended the throne in 305, and Constantine's father --Constantius - became ruler in west half of the Roman Empire. When Constantius died in the following year, Constantine declared emperor by his soldiers. However, other generals at odds with each other about this coronation and even civil war was inevitable. The war ended in 312 when Constantine defeated by his opponent who still survive --Maxentius-- in a battle at the Milvian bridge near Rome.

Can not be certain when Constantine entered Christianity. The stories are commonly heard say, on the eve of the battle at Milvian Bridge, Constantine saw a cross burning in the sky and says "By this sign you will be able to conquer." No matter when he entered Christianity, Constantine did much for the advancement of Christianity. One step is to make pemulanya Act Milan. With this legislation Christianity a legal religion and religion is tolerated. The law also allows the return of the wealth of the Church that had been seized in the past of annihilation and ransacked in the past. Also declared Sunday as a day of worship.

Milan legislation is not based solely by the attitude of religious tolerance. Instead, the government Constantine can be considered as a sign of beginning the persecution of the Jews that continued in Christian Europe in the coming centuries.

Constantine never made Christianity the official religion of the state. However, through regulatory and political measures he is clearly driving the development of this religion. In the reign obviously, those who entered the open door of her Christian means in terms of ease up the career ladder in government. And decisions issued by Constantine also gives immunity and privileges for the church. Similarly, he built the famous churches in the world - such as the birth of Jesus in Bethlehem church and the church of the Holy Sepulchre in Dar-essalam. All of this church was built during the reign of Constantine.

The role of the Roman Emperor Constantine as the Christian religion by itself makes him entitled listed in this list. However, some actions to contain the effects of distant futures. For example, he is restoring and expanding the city of Byzantium, and replaced with the name of Constantinople (now called Istanbul) is one of the largest cities in the world and remains the capital of the Eastern Roman Empire until 1453, and several centuries later became the capital of the Ottoman Empire.

Constantine also plays an important role in the internal history of the church. Involved in the dispute between the followers of Arius and Athonius (two Christian theologians who propose a different doctrine), Constantine called the Council meeting Nicola (in 325), the first church council proceedings. Constantine the Council take part actively, can solve the dispute with accepted Nicene Doctrine, which later became the orthodox doctrine of the church.

It is another important role in the preparation of the relationship of civil regulations. Constantine made ​​legislation governing corporations hereditary (like Joqal, bakers). Issuance of edict that also set the "colony" (peasant class) barred from leaving cultivated fields. In the modern sense of this decree means change "colony" (tenant farmers) became slaves, bound to the land. This decree and other rules of the foundation stone of the whole social structure in medieval Europe.

Constatine not baptized until he lay in bed in a state of dying, though clearly he had entered Christianity long before that. However, along with it is also true that the soul of his christianity faded completely. Although the size of the time, he was so violent and cruel. This attitude is not directed solely to his opponents. By reasons that are less clear, he punished his wife and son in 326.

Can be questioned, the acceptance of Christianity before Constantine does not alter the course of history, but merely endorse the things that are inevitable. In addition, although Biocletian Emperor (reigned from AD 284-305) has done a great pressure against Christianity, his efforts to make religion was not successful because at the time of Christianity is far more powerful than the forces that will hit even with violent acts, however. Posible the people consider Biocletian crush depleted experimental failure of Christianity and religion though it could win without interfering Constantine at all. Supposition and speculation as it is interesting, but not convincing and uncertain. It is difficult to imagine what would happen without Constantine. It is increasingly clear, with his encouragement, Christianity spread well on the size and number of the following areas of influence. From the small group that does not mean only a period of a century became the established religion and has great influence in the world.

Evidently already, Constantine is a pivot figure in European history. Its place in the order of the list is higher than the figures of Alexander the Great, Napoleon and Hitler because of his influence that has a long reach.