Discover the gateway to the home of Goliath, the biblical city of Gath

Gath was one of the five Philistine cities and certainly the largest and most influential city of the time. An archaeological expedition in the city of Gath, 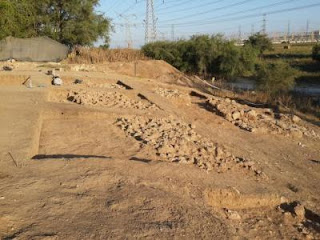 The gate of the city, according to archaeologists, is the largest ever found in Israel and is an incontestable proof of the enormous influence of the city during this period of history. Besides the monumental door, it has also found an impressive wall and several buildings in the vicinity as a temple or a production of iron.

Among the most significant findings include temples dating back to the XI-IX BC , Evidence of an earthquake in the eighth century BC, the first Philistine inscription with two names similar to Goliath or a variety of objects related to the Philistine culture.

The influential city in which Goliath was born was destroyed at the hands of the exercise by Hazael, king of Syria, around 830 BC. According to the Bible in the Old Testament, Goliath was a giant soldier, extremely high (2.9 meters) champion of the Philistine army, which besieged for 40 days the armies of Israel. There he was beaten and injured by David with a simple sling and a stone, dying finally beheaded by his own sword.