One of the first moments of his life was astonished to discover a magnetic compass from his father when he was four or five years. Watch the needle always pointed in the same direction left him fascinated. 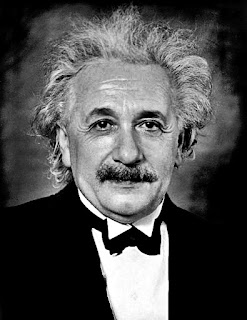 Taciturn. Little Einstein gave no early signs of genius. In fact, he was slow in learning to speak, was a taciturn child behavior, and instead of playing with peers, tended to walk thoughtfully and daydreaming.

The compass. One of the first moments of his life was astonished to discover a magnetic compass from his father when he was four or five years. Watch the needle always pointed in the same direction left him fascinated.

Democrat. The scientific ideal of democracy was Einstein, who in his book "My ideas and opinions" defined as "That respect each man as an individual and not any of them becomes an idol". As for the money believed that "only appeals to selfishness and irresistibly invites abuse."

The Einstein refrigerator. Besides theoretical physicist, Einstein was inventor. One of its most interesting creations was a type of refrigerator, which decided to make after hearing that a family living in Berlin died to break the seal of the home refrigerator and release all their toxic gases. Einstein wanted the new not have parts that could break, it was more secure, eliminating the pump used to compress the refrigerant. And he created the Einstein-Szilard pump based on electromagnetism. And he was silent and emissions test.

Violinist. Einstein was fond of two things: sailing navigation and music. He played the violin, and it seems that the connection between this instrument and science met her thanks to Pythagoras, one of the first scientists who studied acoustics, and also created taut strings with sliding bridges, the foundation of the current violin.

The latest missive. The last letter Einstein wrote, dated April 11, 1955, was addressed to philosopher and mathematician Bertrand Russell to accept the final form of the document later known as the "Russell-Einstein Manifesto," in which he called for a conference to study the dangers of the arms race and warned that there was "a very real danger of extermination of the human race by dust and radioactive rain clouds" and that the only "hope for humanity is to avoid war."