Discovered an intact coffin of the seventeenth dynasty of Ancient Egypt

Within the small chamber carved into the rock has recovered a large anthropomorphic carved wooden casket and decorated in the characteristic style of the dynasty XVII, called "rishi" (meaning "wings" in Arabic) 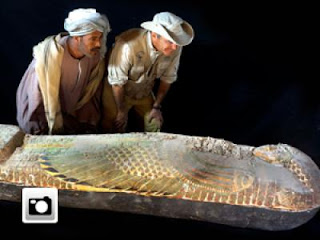 Egyptian civilization is a mystery. From its giant pyramids to the mummies, sphinxes, hieroglyphics and theological beliefs. A group of researchers from Djehuty Project, led from the Higher Council for Scientific Research (CSIC), they have now discovered on the northern edge of the necropolis of Dra Abu el? Naga in Luxor (ancient Thebes), an intact coffin of a man called Neb, 1600 BC corresponding to the XVII dynasty of ancient Egypt.

Researchers have sensed that inside the chamber had found a coffin. In its day the entrance was sealed perfectly with adobe and since then no one had accessed the room. Like a discovery of Indiana Jones himself is involved, Neb body was found in a burial chamber carved into the rock to four meters deep. The coffin, two meters long and half a meter wide, is in good condition, bright colors and maintains its original decoration.

Within the small chamber carved into the rock has recovered a large anthropomorphic carved wooden casket and decorated in the characteristic style of the dynasty XVII, called "rishi" (meaning "wings" in Arabic). As detailed José Manuel Galán, director of Djehuty project, "for that reason, the coffin lid is painted in a pair of wings spread over the corpse, like a winged goddess embraced her from behind, thus giving protection in the beyond".

"This style of coffin is rare, as it was in use for only a short period of time, when Egypt was not unified. So, very few have been found in its original place and have been well documented in their archaeological context, "explains CSIC researcher. An inscription runs from chest to foot the coffin lid and directs an invocation offerings to a man named Neb. His mummy is still in the box and apparently in good condition.

This finding, along with others carried out in the same area, they confirm that Dra Abu el-Naga was where were buried the members of the royal family and their courtiers dynasty XVII, 1600. C. A little known period and at the same time, key to understanding the origin of the Egyptian empire, and the structure and functioning of the administration in the new capital city of Thebes.

Why was it important to the XVII Dynasty?
Right in this historical period, still little known, the city of Thebes became the capital of the kingdom, and laid the foundations of the empire and the Egyptian rule over Palestine, Syria, and Nubia.La dynasty XVII is part of the historical period known by archaeologists as the Second Intermediate Period (between 1800 and 1550 BC), characterized by the hegemony of rulers of Syrian origin? Palestinian settled in the eastern Delta. At this time the monarchy did not control the whole territory and the effective power was in the hands of local governors.

In this period Thebes was the most important southern city and the dynasty XVI led the reconquest and the expulsion of the rulers of the north, unifying the country and sowing the seed of a new historic era in Egypt, the New Kingdom, the era of the great kings who would forge the Egyptian empire from his new capital, Thebes.

These findings allow to complete the puzzle of the work done during these years in the tombs of Djehuty, supervisor Treasury Queen Hatshepsut (1470 BC.), And Hery, courtier who lived about 50 years before royal scribe said.

About Djehuty own and Queen Hatshepsut, Beau himself explains his strange funerary behavior. "We discovered then that Djehuty, unlike the rest of the courtiers of his time, decided not to locate if his tomb near the mortuary temple of Queen Hatshepsut. The Treasury preferred upper hill Dra Abu el? Naga, half a kilometer north, because that area was also special in that there lay members of the dynasty XVII "explains CSIC researcher.

Egyptian culture remains one of the most enigmatic of history. Of course, step by step and excavation after excavation archaeologists are unraveling its secrets through their tombs, hieroglyphics and buildings. And in this process the Spanish science is very present, mainly through Djehuty Project.