The conspiracy against the Order of the Temple

The Knights Templar, founded in 1119 to protect pilgrims traveling to Jerusalem after the First Crusade, had accumulated enormous prestige and power 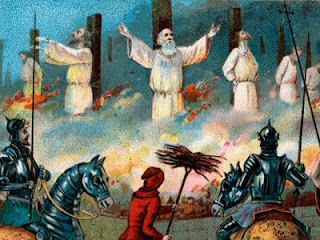 The Knights Templar, founded in 1119 to protect pilgrims traveling to Jerusalem after the First Crusade, had accumulated enormous prestige and power. However, in the early fourteenth century the Muslims had expelled the Crusaders from the Holy Land, so that its main mission -the places- Saints defense was compromised. The papacy responded by proposing the unification of the various military orders, in order to regain strength and try to launch a new crusade to recapture. But this did not occur; the Christian kingdoms were involved in internal problems, while the Templars rejected the drive for fear of denatured, which alienated them to carry out their commitment to Rome to support the reconquest of the Holy Land.

The real problem was that the Temple had become an autonomous state within the Christian kingdoms. They had important treasures, the result of numerous donations they received, did not pay taxes, sported important positions in the courts and, in addition, only obeyed the pope. His power was particularly important in France, kingdom of which came most of his knights and where most treasured wealth. Therefore they had become a serious obstacle to plans to strengthen the power of the king of France, Felipe IV. The French crown was heavily in debt for over fifty years with the Order, because it had borrowed huge amount had to pay to rescue Louis IX, when he was jailed following the failure of the Seventh Crusade, and the same Felipe IV had returned to ask for money to fund its expansive policy. Certainly, if the Templars disappeared, the debt would be extinguished and reinforced the power of the monarch.

Therefore the King of France undertook the task of preparing an entire conspiracy to destroy the Temple, accusing the worst crime: heresy. Counting on the treacherous aid of former military Order of the Templar, the French monarch produced a series of invented heretical practices that would run the Temple, in order to discredit him before all Christendom and to achieve, by the way, the essential collaboration of Pope Clement V, for he alone had full jurisdiction over the Knights of the Cross.

The list of alleged heresies and aberrations was based both outright lies, distortions and domestic rituals of the Order. The result is that accused them of denying Christ, of spitting on the cross, sodomy, of worshiping an idol, necromancers and all sorts of disgusting habits designed to impress the population. He had orchestrated a smear campaign all with the sole purpose of justifying their destruction.

Meanwhile, in June 1306, the Temple, oblivious to the whole conspiracy was afoot, rejected the papal request to unify the military command, which entered its relations crisis. A year later, on October 12, 1307, the King of France, after carefully prepare all specifications false charges, he proceeded to arrest throughout the country and on the same day to 141 Templars and confiscate all their assets. Immediately they underwent an inquisitorial process, which meant that they suffered torture or were threatened with them with the aim that confess the crimes they were accused.

Obviously, many admitted the charges against him by terror, beginning with the same Grand Master Jacques de Molay. Around the Gallic country he was mortally wounded.

A pontiff coerced
However, although estranged from the Temple and pressure from Philip IV, Pope Clement V felt disowned by it, as only he could act against the Templars. For this reason it established a commission of inquiry as he ordered all the Christian kingdoms in the arrest of members of the Order, while prohibiting torture.

The fact that several kingdoms, such as Aragon and England, not acatasen immediately and zealously mandated test that few believed truthful accusations of the French monarch.

When the papal delegation arrived in France, all the defendants retracted their confessions saying they had been extracted under torture, so that Clement V in person decided to take the investigation. Angry, the king of France fought reiterating accusations with false witnesses, but the pope insisted on leading the process of the main defendants, finally absolving them.

Philip IV was not willing to release the prey and France forced the Church to continue the process. To do this, they accused the Templars who had already recanted those who had spoken in his defense of relapsed heretics, which meant death by fire.

Sentenced to dissolve
In October 1311 began the council to decide the fate of the Temple. In him they could not prove the charges against the Order, but the pressures of the king were so strong that Clement V, although not condemned, he was forced to dissolve. The assets of the Temple were transferred to the Hospital or, in the case of Spain, other new orders were founded. The Templars who had could continue living normally, but had confessed that at first they were convicted.

The king wanted to eradicate all traces of the Order and this should eliminate their leaders, beginning with the Grand Master, Jacques de Molay, and three more commanders who were imprisoned in Paris. In March 1314 they were told his life sentence. In a burst of dignity, loudly they proclaimed his innocence and the falsity of the allegations. Faced with such a show of contempt, they pierced the Cardinals sentencing the Pope, but Felipe IV went ahead and sent to the stake 36 Molay and other leading Templars. The criminal plot had succeeded: the French king consolidated his power, saw its huge debt extinguished and owner of much of the wealth of the Temple was made.

The dramatic end of the Templars and the sort of accusations were poured over them, he has given rise to the legend that has remained until today, reaching several esoteric groups that heirs of his legacy proclaim appear.