After the First Sino-Japanese War (1894-1895), Empress regretted this decision and chose as heir to his nephew born in 1905: Puyi, who would be the future Xuantong, the last of the 22 dynasties of emperors 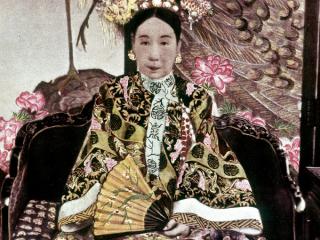 The Empress Dowager Cixi exercised the real power in China from 1861 until his death in 1908. When young or Tzishí Cixi, the Manchu clan Yehonala, was called to the palace as a concubine, all in their lineage they felt honored and happy. The Queen Mother had reviewed more than 600 girls and Cixi was chosen as concubine fourth category to  the harem of the new emperor Xianfeng.

The official Empress Ci'an could not give Xianfeng heir he needed, something that did succeed, in 1856, Cixi; thanks to its imperial stem, rose from fourth to second degree of concubinage. The emperor died in 1861 and was succeeded on the throne the son of the concubine, Tongzhi. It was a strange death and numerous rumors about a possible involvement of Cixi. The small Tongzhi was only five years old when he came to the throne, so the concubine mother was inaugurated as the new emperor. Cixi was named Sikung - the west Emperor, while the wife of the deceased official was christened T'seungan, widow of dignity, besides the nickname Tungkung - Emperor of the East. Both mentors were erected in the new emperor-child, though Cixi was actually governing.

Cixi arranged a marriage for him with the Mongol princess Ha-Lu-Te and delegated power to Tongzhi. However, the young emperor died of smallpox soon (1871), again leaving power in the hands of the former concubine. A Tongzhi's death, his wife was pregnant. If that child had been born, the regent had been the Mongol princess and not Cixi, but as the widow of his son committed suicide, there was no heir apparent. Many voices spoke of poisoning, which became double alleged murder when he died the other regent, Ci'an.

The power for nephews
With these two deaths, all the power fell to the former mistress, now empress of the East and West. Cixi himself elected as successor to the throne a nephew of four years and it was erected again regent.

After the First Sino-Japanese War (1894-1895), Empress regretted this decision and chose as heir to his nephew born in 1905: Puyi, who would be the future Xuantong, the last of the 22 dynasties of emperors. Cixi died on November 14, 1908, but not before having poisoned the Emperor Guangxu in order to pave the way for his chosen Puyi.