The Maharaja and dancer

Ana Delgado and her husband, Maharaja Jagatjit Singh, which would divorce in 1925. If, as Pascal said, the fate of men is related to their passions, the first great illusion of Anita Delgado would dance from an early age 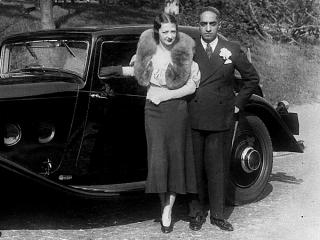 The story of the young Spanish that ended up belonging to the Indian aristocracy. Ana Delgado and her husband, Maharaja Jagatjit Singh, which would divorce in 1925. If, as Pascal said, the fate of men is related to their passions, the first great illusion of Anita Delgado would dance from an early age, contrary to the will of his father.

"One of my earliest memories was coffee Chestnut, Century Plaza in Malaga, where my parents worked, which were of good family, but come down for bribes and squandering of ancestors." With these words describe Anita Andalusian part of his childhood would end at age 14 when, for economic reasons, the family decided to close the family business and go to the capital of Spain in search of a better life.

At the Madrid  unknown, Anita and her sister Victoria convince Dona Candelaria, her mother, to take some dance classes to make them remember their homeland, as a condition not count the secret to Don Angel. However, the "mischief" would be revealed when both sisters were hired to work teloneras with Mata Hari and Pastora Imperio, the new Kursaal theater opened its doors the same month who married King Alfonso XIII and Victoria Eugenia of Battenberg (May 31, 1906).

Madrid dressed in their finery and the Kursaal who prepared new scenarios to delight the illustrious guests . Bullfights, receptions, dinners. And a parade of floats that people crammed the streets of Madrid. So, on a sidewalk, Anita and Victoria watched the parade as excited in a story. Before her, and after the caravan carrying the Prince of Wales, a silver chariot stopped; the most fantastic and beautiful of the occupied Maharaja Jagatjit Singh of Kapurthala, who wore a turban wrapped in magnificent turquoise.

For some reason the coach was detained in that place longer than necessary, while Anita would not stop watching this man who had also nailed his gaze in her eyes . He gave her a gentle smile that made ​​her shiver. His spell would last until the vehicle tore up a prince  who, surprisingly, it would still look back trying not to lose sight of the young.

That same night the Kursaal premiered his new show to lavish guests. Among them was the ruler of Kapurthala he was taken aback to see the girl again. Then, he took an interpreter to make his name Anita in an economic proposition. Disgusted by the audacity, the Andalusian offended the intermediary would tell her not traded in his body . Far from being indignant, Maharaja insisted his goal, even after leaving for Paris. From there, he did not cease in the effort to fulfill their desires were becoming hotter.

Given the continuing negative, Jagatjit Singh, he sent one of his bodyguards to Madrid with a marriage proposal. That was not liked by the Delgado family, the prince saw only thirty-four, the intention of adding a wife over the hundred and twenty he already had. However, Valle Inclan, Julio Romero de Torres and painter Oroz, Kursaal regulars decided mediate political issues-for too long to recount here, and sort out the "harem" that so preoccupied Anita. The prince was Kapurtala willing to give up all his wives by his passion to Anita and the wedding was held on January 28, 1908.