The oldest art work in America

Optical and electron microscopy was also used to verify that the edges of the size showed no signs of having been recently cut or that the grooves were made ​​with metal tools. After authenticity 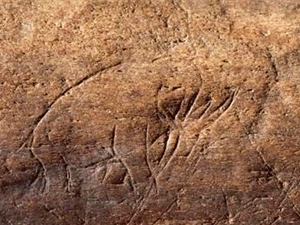 The researchers at the Smithsonian Institution and the University of Florida have announced the discovery of a fragment of bone, approximately 13,000 years with an engraved image of a mastodon. This engraving is the oldest known art example of the Ice Age in America. The finding is published in the journal  Journal of Archaeological Science. The bone was discovered in Vero Beach by James Kennedy, a fossil hunter career, which took the bones and later, during cleaning, etching discovered. Aware of its potential importance, Kennedy contacted scientists at the University of Florida and the Smithsonian Museum. "This is a very exciting discovery," said Dennis Stanford, an anthropologist at the Smithsonian National Museum of Natural History and co-author. "There are hundreds of representations of proboscis on cave walls and carved bones in Europe, but none in the United States, until now.".

The recorded measured 7.62 centimeters long from the top of the head to the tip of the tail, and 2.54 centimeters in height from the top of the head to the bottom of the right foreleg. The fossil bone is a fragment of a long bone of a large mammal , most likely it's a mammoth or mastodon, or could be a giant sloth. As explained Barbara Purdy, an anthropologist at the University of Florida and author main research team, "there was considerable skepticism about the authenticity of the incision in the bone until it was examined exhaustively by archaeologists, paleontologists, forensic anthropologists, engineers of materials science and art specialists." The team examined the elemental composition of bones and other recorded the same deposit.

Optical and electron microscopy was also used to verify that the edges of the size showed no signs of having been recently cut or that the grooves were made ​​with metal tools. After authenticity , this rare specimen provides evidence that the inhabitants of Americas during the last Ice Age created artistic images of the animals they hunted. The engraving is at least 13,000 years old, as it is the date of the last occurrence of these animals in eastern North America.