Yes it is true, however, that the Emperor accused the fire to Christians as scapegoats to ward off rumors that it to him, and that these repressed and persecuted viciously and extreme hardness. This again won the favor of the people 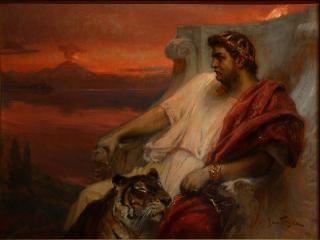 The Roman emperor Nero was forced to commit suicide on June 9 year 68. A crazy tyrant, extravagant, cruel, scourge of Christians, arsonist, matricide and loved by the people and has been described Nero Claudius Caesar Augustus Germanicus, head of the  Roman Empire. Between 54 and 68 of our era few epithets seem be more informed than others. Thus, for example, of murderer of his own mother, Agrippina according to some, because it conspired against him; according to others, in order to marry her lover, Popea and cold and cruel tyrant: his reign was characterized by systematic executions of all who stood in his path, including his British stepbrother and his former tutor, the philosopher Seneca.

Nephew also controversial Caligula, Nero came to the throne after the death of another of his uncles, the emperor Claudius, who had adopted him and named successor to the detriment of his son, Britannicus. It thus became the last ruler of the dynasty Julio- Claudia (descendant of Julius Caesar ) initiated by Augustus. not all were shadows in his reign historians today emphasize that defeated the Parthian Empire, quelled the revolt of the Britons and improved relations with Greece. It also promoted diplomacy, trade, sport and culture, especially the theater he build many and music. He himself was an amateur musician: he sang and played the lyre, as seen in many films.

What nowadays is seriously in doubt is that it was he who ordered the famous  fire of Rome July 64 , and contemplate the city in flames while his favorite pastime she gave herself: tañer his instrument playing the epic Iliupersis (this it was an evil historian Suetonius, who hated him). The devastating fire was probably accidental and Nero, on hearing of it, quickly traveled to Rome from his hometown, Anzio, where he was to handle the disaster. According to Tacitus, used his own treasure to provide material assistance, opened the doors of his palace to people who had lost their home and opened a fund to pay them food.

Yes it is true, however, that the Emperor accused the fire to Christians as scapegoats to ward off rumors that it to him, and that these repressed and persecuted viciously and extreme hardness. This again won the favor of the people, who adored him another historically true; not the governors, the Senate and the army, which after many conspiracies and tensions gave a coup, placed Galba on the throne and declared "public enemy" Nero. He fled Rome and himself surrounded by soldiers, he asked his secretary Epaphroditus stabbed him. It happened on June 9, AD 68, and according to another historian of the period, Dion Cassius, his last words were: "What an artist dies with me!".