To maintain her certain beauty, Elisabeth follows a drastic diet, accompanied by multiple sports activities, such as horse riding or gymnastics, which she practices thanks to the equipment she has installed in her apartments. Sissi has other passions such as poetry and travel. 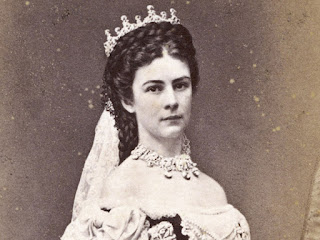 Sissi imperatrice. The childhood of Sissi. Elisabeth of Austria , better known under the nickname of Sissi, was born on December 24, 1837 in Munich and died murdered on September 10, 1898 in Geneva. Sissi is the daughter of Maximilian von Wittelsbach, Duke of Bavaria, and Ludovica (or Louise) of Bavaria, daughter of King Maximilian I of Bavaria. Sissi, born with a tooth (like Napoleon!), Is named Elizabeth, in honor of Ludovica's sister, Queen Elizabeth of Prussia. Elisabeth spends her childhood with her parents who do not love each other, and whom everything opposes. His father, "Max", is good-natured, eccentric and traveler, while his mother did not appreciate being married to a younger brother of the Bavarian family. Sissi, however, will have nine brothers and sisters who will get along perfectly, seven of whom will reach adulthood. Sissi spent her childhood, happy, between the palace of Ludwigsstrasse in Munich and the castle of Possenhofen, located on the banks of Lake Starnberg, about twenty kilometers from the Bavarian capital.

At the height of the revolutionary period, in 1848, Ludovica and her daughters visited the Austrian imperial family, who had taken refuge in Innsbruck: it was the first meeting between Sissi (and her sister Hélène) and her cousin François-Joseph, her future husband. Sissi has a first idyll with Richard, who serves in the regiment of Duke Max. However, the remoteness of Richard causes deep sorrow in Sissi. Richard dies soon after; Sissi enters a depression, which will not leave her anymore.

Sissi, Empress of Austria and Queen of Hungary
Upon the accession to the throne of Francis Joseph, his mother, Archduchess Sophie, works to find him a wife: she thinks of Helen, sister of Sissi. Thus, a meeting is organized on August 16, 1853 in Ischl; Sissi accompanies his sister. The next day, Francois-Joseph announces to his mother that he will not marry Helen, as it was originally planned, but his sister Sissi. On April 24, 1854, the marriage of Elizabeth and Franz Joseph was celebrated in the Augustinian Church in Vienna. Sissi becomes empress. She has great difficulty adapting to the very strict protocol of the Vienna court, where no place is left to private life. She quickly gave three children to the monarchy (Marie-Valérie will be born in 1868): Sophie, born in 1855, Gisèle, born in 1856 and Rodolphe, born in 1858, who will be brought up by her mother-in-law, whom Sissi could not visit without Sophie's presence. His daughter Sophie died in 1857, at the age of two, which causes much grief and accentuates Elizabeth's depression. During the winter of 1860-1861, Elizabeth went to Madeira to cure her illness on the one hand, and to move away from the court of Vienna on the other. Just back in Vienna, she left for a cruise in the Mediterranean, then spent four months in Corfu. Elisabeth participates actively in the Austro-Hungarian compromise of 1867, by which is created the double-monarchy: Austria-Hungary. Indeed, Sissi is particularly fond of Hungary, where she becomes very popular. She will have a great friendship with Count Gyula Andrassy, ​​who was Prime Minister of the Hungarian Kingdom.

To maintain her certain beauty, Elisabeth follows a drastic diet, accompanied by multiple sports activities, such as horse riding or gymnastics, which she practices thanks to the equipment she has installed in her apartments. Sissi has other passions such as poetry and travel.

In 1889, her son Rodolphe was found dead (perhaps by suicide) at the Mayerling hunting lodge, in the company of his lover, Marie Vetsera. Rodolphe rests in the crypt of the Capuchins in Vienna. From this tragic event, Sissi plunges into melancholy and a great depression. On September 10, 1898, in Geneva, when she had just left the Beau-Rivage hotel where she was staying to board a boat, she was murdered by Luigi Luccheni, who had originally come to Geneva to kill the Duke of Orleans. Stunned, Sissi still wants to take the boat, not completely realizing what had happened to him. However, she is brought back to her apartment, where she succumbs to her injuries. It also rests in the crypt of the Capuchins. The films of Ernst Marischka, in which plays Romy Schneider, have strongly contributed to make known Sissi.

Marriage and descent:
On April 24, 1854, Sissi married Franz Joseph in the Augustinian Church in Vienna. Franz Joseph is the son of Franz Charles of Austria, brother of Emperor Ferdinand I, and Sophie of Bavaria, sister of Ludovica and aunt of Sissi. Sissi and François-Joseph have four children: